I can’t really explain it but I always wanted to travel to America – it was a dream from my early childhood. And so when I heard of Camp America in 1969 I applied to become a ‘camp counselor’. I was just out of journalism college and before starting my first job on the Kentish Times. I thought then that it would be my only ever chance of visiting the States.

I had to fill out forms and then go for an interview at an office somewhere in London. To my utter delight I got through the selection process.

Camp America is a wonderful operation that started that year, in 1969. It gives   students from all around the world the opportunity to teach in summer camps in the USA. You work for two months with the children and then have a couple of weeks to travel around before flying home.

Of course I dreamed of going to a co-ed camp in California, flirting with the boy counselors and getting a tan. In fact I got an all girls church camp in New England!  But, despite my initial disappointment, it turned out to be one of the best experiences of my life.  I loved nearly every moment of it. I taught tennis and riding, or as the American’s would say, horseback riding.  The camp, which is still thriving is called ‘Fleur de Lis and it is nestled in woods beside a beautiful lake in New Hampshire. It was a magical place and the other counselors were welcoming and the children in our care were terrific.

The only thing I didn’t like was being bitten to death by spiders, horse flies and mosquitoes on camping trips and no matter what the camp nurse gave me to prevent the bites, or treat them, the blighters always found me and bit me and left everyone else alone. 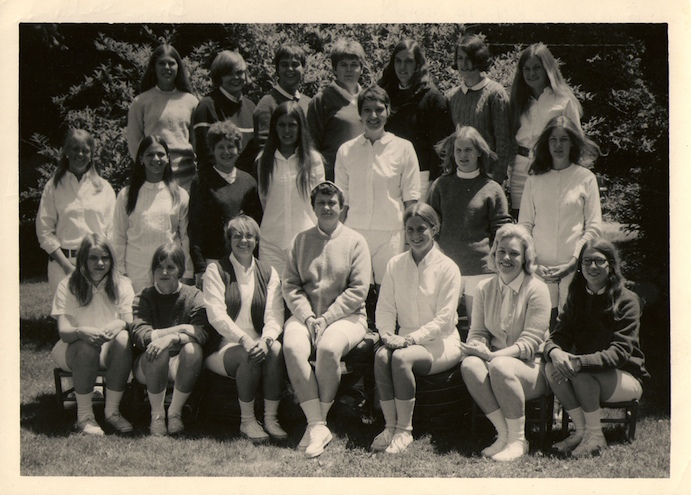 Can you tell which one is me?

If you want to know more about Camp America this is the link. http://www.campamerica.co.uk/

So my dreams of going to America came true.  And now, 45 years later, with many wonderful holiday trips to the States since then, I am planning to launch autodotbiography there in the autumn, or ‘Fall’ as the American’s would say.

But there may be another reason for my yearning to go to America. It maybe that my fascination with America is in my genes.

After my father’s death I inherited a large grey snakeskin wallet, in it were 14 letters written by my great-grandfather, Walter Mitchell (although I didn’t know his name until I read the letters). They were written in the most beautiful copperplate handwriting and they were written from America.

In 1867, at the age of 23, he left England with two chums and went to seek his fortune in the United States.  He wrote the letters back to his mother, his brother, and his sweetheart and because of those letters I know more about this man than I know about his son, my grandfather.

As he travelled west, working his way as a carpenter/joiner, he wrote back about his work, the people he met, the fashions, and smoking a peace pipe with the native Americans or ‘injuns’ as he called them.

So, I plan to follow in his footsteps when I launch autodotbiography and go to the places he went to and see if any of his work is still standing.

But first I had to ‘translate’ autodotbiography into American English and remove all the ‘favourites’ for ‘favorites’ and ‘primary schools’ became ‘elementary schools’.

That is now done and I am beginning to research Walter’s letters so I can plot my journey into my great-grandfather’s adventure in the States. If you want to find out what happens next keep reading my blogs.

Why not have a go and see for yourself? Sign up for a free trial - no credit card details required.