WD40 for the memory - your photographs

How often do you get out the family photo albums and look at them?  Not often I bet.  We are all too busy living our lives to ponder the past.  But may I recommend that you if you are considering writing your life story that one of the best places to start is with your photographs.

Photographs of your grandparents; or that special holiday; or your wedding day, suddenly the image brings back the emotions of the day - the feelings of joy or despair, or triumph or, in my case, disaster if it is a picture of my school sports day.

As I flick through the pages of the albums the people and places long forgotten greet me and I can feel the absolutely freezing cold water in that romantic looking Scottish loch, and I can hear the munching of the New Forest ponies as I approach them with my little sister, both of us hoping to be able to stroke them.

Photographs can be incredibly important to us. When I worked on ‘That’s Life!” on BBC One we did a story about the inevitable deterioration of Polaroid pictures because we were approached by a couple who had suffered a still born birth and the Polaroid picture taken by the midwife of their dead baby was their most treasured possession.  The picture was fading away and they were desperate to preserve it.

Fortunately most of us do not have such a powerful need to keep a photograph for posterity but we all have favourite pictures that get damaged, eaten by the dog, scribbled on by the children, coffee and cake stained.

One of my most precious photographs is of my great-grandfather Walter Mitchell – of whom I have written before. As a young man he went off to America in 1867 to seek his fortune and wrote back wonderful letters about his adventures in the Wild West his mother, his brother and his sweetheart, Emillie.

In one of his letters to Emille he says he has included his ‘cart’ (a photograph) and in a leather-bound album of anonymous ancestors I found one taken in Missouri. I knew it had to be him. But it is damaged and badly faded - almost invisible.  Even so I still included it in my autodotbiography because he is such a special chap.  I wish I had known about Photographs Forever when I was compiling my autodotbiography.  Unfortunately  I only heard of them when I was at the ‘Who Do You Think You Are? Live show earlier this year. It was there that I was given a card for Photographs Forever - a company that specializes in restoring photographs and photograph retouching.

Last week I went down to meet Richard Haines, the man who can repair incredibly badly damaged images and make them new again. I took Walter’s picture with me, not trusting the post with my precious photograph. Richard scanned in my much-damaged picture and went to work on it.   The next day he emailed me the restored photograph.  For the first time I can see the features of my 23 year old great-grandfather.  His eyes twinkle out of the photograph, his cravat hangs in a debonair manner. I am thrilled with the results and will have to republish my autodotbiography with the new version Walter’s ‘cart’. 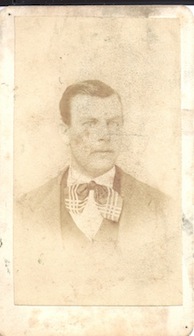 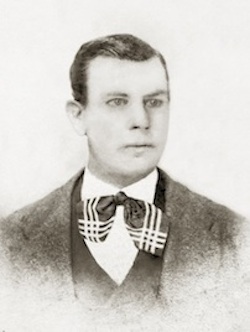 If you are writing your autobiography and have damaged photographs that you would like to get repaired then I am happy to recommend Photographs Forever because, like autodotbiography, they believe in providing the highest possible quality.

If you want to find out more go to www.photographsforever.co.uk