Thrilled with these comments

Liz Robertson writes about getting her father to write his autodotbiography.

“I had seen an advert in a Saga magazine for Autodotbiography and it totally hooked me right away! I had thought it would be so special to have my dad’s autobiography.  I then went on to the website and read about it and watched a video clip of someone getting their book delivered and I was totally convinced that this would be an amazing thing for our family.

“ I thought it would be great to know a lot more about my dad’s life and have it all on record.  However, apart from getting all the facts, what I really wanted more than anything else was to get was my dad’s thoughts and opinions about it all, and to find out how he views the life he has had, with all its ups and downs. I also wanted to know about different events and relationships and how these affected him....Does he have any regrets, would he have done anything differently, what does he think is important in life? etc.

"My dad is always up for a challenge. He has always been like that. He’s always got a project or something on the go. He always keeps himself busy with hobbies and activities and still plays golf and bowls, dances regularly, sings, took up playing the keyboard about 10 years ago, etc.  He definitely doesn’t waste a minute.  My dad was 79 when he wrote his autobiography.  I knew that he would be able to do it at this point and felt that it was important for him to do it when he still has a good memory etc.  When people ‘put things off till later’ sometimes things happen and then you don’t get the chance to do it later.  I didn’t want to have that regret.

"I told my brothers, Alan and Billy, about Autodotbiography and suggested we buy this for my dad’s Christmas. I can’t say they were totally convinced but went along with it.  We hadn’t mentioned it to my dad so it was definitely a surprise Christmas present!

"What attracted me to Autodotbiography was the fact that it looked like you get a really professional, high quality book. I liked the idea that you could easily upload your own photos, and that you got a whole year to do it!

"Another huge deciding factor was that there was a telephone number you can call and get support as often as required.  I thought it was also good that it gave you ideas of what to write and things that prompt you and jog your memory.

"Instead of following the recommended format, my dad as usual did things his own way.  He never seems to take the easy route.  Although he can type, he found it much easier to hand write his story and then I typed it all up for him.  I can honestly say we enjoyed doing this together. On completion, we got my brother Alan over to help input all the text and the photos.  Again, Bryher was at the end of the phone and gave us all the help and support we needed.  She was always patient and explained things well to us.  It was obvious that she is very passionate about helping people write their autobiographies and wants to help them achieve this as easily as possible.

"My dad received his book though the post and phoned to let me know.  I knew he was really pleased and excited about it, and I couldn’t wait to see it too!  As I had typed it all, my dad and I were the only ones who knew the content, and I was just so curious to see what it all looked like in print.  I was also so excited to know what my other family members thought of it when they read it.  The book was fantastic.  One minute you were laughing at something Dad had said, then the next you were filling up, and tears were coming down your cheeks.  It is a real emotional rollercoaster.  We bought additional copies so my brothers and I and all the grandchildren have their own copies to keep. My dad wrote a personal note on each of them and signed and dated them.  I’ve sent you a photo of mine.  What can I say?....To me, these are absolutely priceless....  I am genuinely indebted to Autobiography, as without their format, affordable price, and all the support and expertise, this would never have happened for us.  We could never have done it on our own!

"At my dad’s 80th birthday party last October, he made a speech and showed people his book, telling them that he had written his life story and if anyone wanted to read it, they could borrow it.  It has now been circulating around many friends and relatives. 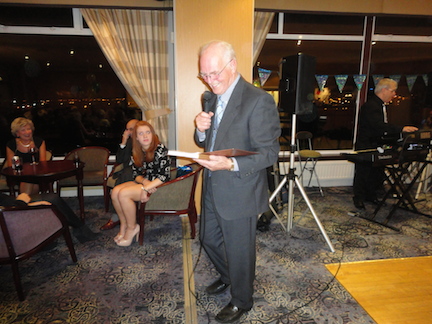 "Everyone who has seen my dad’s book has said it’s incredible and how lucky we all are to have this.  However, they also all say that they could never do it themselves.  They say they could never remember everything.  However, having journeyed with my dad through this I think that once you get started and get into it, then all the memories seem to come tumbling back.  My dad found that when something came into his head that he wanted to include, he would take a note of it right away so he didn’t forget it again.  Then a friend gave him a dictaphone and he started using that. 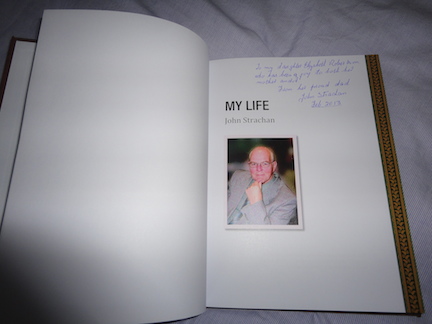 "It felt like such a relief when it was finished and such a tremendous achievement.  I would without doubt encourage others to do it.  Don’t worry about it, just jump in there and put down things as they come, and it will somehow just come good in the end and turn into something amazing!!  Thank you Autodotbiography!!!