Janet gets a surprise

Life can be full of strange co-incidences, and so it was that I found I was travelling on the same ship an autodotbiographer who had just completed her book - Janet Leckie.  We had met originally when I was speaking on a Fred Olsen ship - the Balmoral - and she had decided to write her life story for her family.

When I realised we were going to be sailing across the Atlantic on the Queen Mary 2 at the same time - for me as part of my journey following my great-grandfather's footsteps - I immediately contacted the printers and asked if they could rush through the order.  They were great and so I boarded the ship with Janet's book all wrapped up and boxed up as though it was going through her front door.

I thought you might like to see her comments and her reaction to her own book.  This could be you. A perfect Christmas present.

Would you like to find out more about how it works? 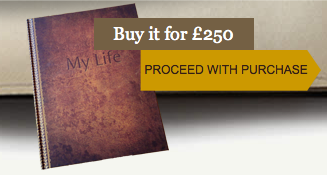